Cadzow to Abercorn, The vast line of Hamiltons that connects most of us

There are so many Hamilton lines, researching them when finding them in my tree has been difficult to determine who is who and whether anyone has been mixed up.

I have managed to collate some interesting PDF's for our archives to ensure we all have the correct person linking up.

The Hamilton chiefs descend from Walter fitz Gilbert of Hambledon who appears in a charter to the Monastery of Paisley in about 1294.[1] His lands appear to have originally been in Renfrewshire, however, his support for Robert the Bruce rewarded him with lands in Lanarkshire and the Lothians[1] These lands included Cadzow, which later became the town of Hamilton, South Lanarkshire.[1]

Chief among the legends still clinging to this important family is that which gives a descent from the House of Beaumont, a branch of which is stated to have held the manor of Hamilton, Leicestershire; and it is argued that the three cinquefoils of the Hamilton shield bear some resemblance to the single cinquefoils of the Beaumonts. In face of this it has been recently shown that the single cinquefoil was also borne by the Umfravilles of Northumberland, who appear to have owned a place called Hamilton in that county. It may be pointed out that Simon de Montfort, the great earl of Leicester, in whose veins flowed the blood of the Beaumonts, obtained about 1245 the wardship of Gilbert de Umfraville, second earl of Angus, and it is conceivable that this name Gilbert may somehow be responsible for the legend of the Beaumont descent, seeing that the first authentic ancestor of the Hamiltons is one Walter FitzGilbert. He first appears in 1294–1295 as one of the witnesses to a charter by James, the high steward of Scotland, to the monks of Paisley; and in 1296 his name appears in the Homage Roll as Walter FitzGilbert of "Hameldone." Who this Gilbert of "Hameldone" may have been is uncertain.
— Encyclopædia Britannica (1911).[2]

As already mentioned Walter Fitz Gilbert was rewarded with lands for his support of king Robert the Bruce.[1] Walter's son, David, fought at the Battle of Neville's Cross for David II of Scotland in 1346.[1] David was captured and was not released until a substantial ransom was paid.[1]

However, the royal marriage did not take place and Mary married an heir to the French throne instead.[1] James Hamilton was created Duke of Châtellerault because he had figured prominently in the marriage negotiations with France.[1] In 1561, he was sent into exile for five years because he openly opposed Mary's marriage to Henry Stuart, Lord Darnley, having had his hopes rekindled when Mary's marriage ended upon the death of the Dauphin of France.[1]

James Hamilton of Bothwellhaugh was a Scottish supporter of Mary, Queen of Scots, who assassinated James Stewart, 1st Earl of Moray, Regent of Scotland, in January 1570.[5]

The 4th Earl of Arran, James Hamilton, 2nd Marquess of Hamilton became Lord Chancellor of Scotland and was made keeper of both of the strategic royal castles; Edinburgh Castle and Stirling Castle.[1] He had been advanced to the rank of marquess in 1599.[1] His brother was Claud Hamilton, 1st Lord Paisley, who had been created Lord Paisley in 1587 and later Lord Abercorn.[1] This branch of the family also prospered and Abercorn was advanced to an earldom and later a dukedom in 1868.[1]

The third Marquess, James Hamilton, 1st Duke of Hamilton was a staunch supporter of Charles I.[1] Charles rewarded him with the dukedom in 1643, which made Hamilton the premier peer in Scotland.[1] Hamilton led a royalist army into England but was defeated at the Battle of Preston (1648) by the Parliamentarians of Oliver Cromwell.[1] Hamilton was later executed in 1649 at Whitehall shortly before the king met the same fate.[1] Hamilton's brother, William Hamilton, 2nd Duke of Hamilton was also a brave soldier but was killed at the Battle of Worcester in 1651.[1] The title passed to Anne Hamilton, 3rd Duchess of Hamilton, daughter of the first Duke.[1] She was a woman of great intellect but she inherited estates heavily burdened by debt.[1] Matters were made worse with her kinsman Hamilton, Earl of Abercorn, challenged her right to succeed to the title.[1] Anne married William Douglas, 1st Earl of Selkirk (later Duke of Hamilton).[1] Their son was James Hamilton, 4th Duke of Hamilton who was killed in a controversial duel in London in 1712.[1]

Seat of the chief

Hamilton Palace in Hamilton, South Lanarkshire, had been the family's seat from the 13th century. Built by Duchess Anne, and her husband William Douglas, 3rd Duke of Hamilton, it had the distinction of being one of the largest non-royal palaces in Europe, reaching its greatest extent under the 10th and the 11th dukes in the mid nineteenth century.

Excessive subsidence of the palace caused by the family's mines led to its condemnation and demolition in 1921.[1] The 13th Duke then moved to Dungavel House, near Strathaven. This was where deputy-führer Rudolf Hess aimed to reach during his doomed peace mission to see the Douglas, 14th Duke of Hamilton in 1941.

In 1947, Dungavel was sold to the coal board, and then on to the government, who turned it into an open prison. Currently, it is the site of a controversial holding centre for asylum-seekers.

The family moved to Lennoxlove House in East Lothian, which remains the residence of the current Duke.[1]

Hamyltowne tartan, as published in 1842 in Vestiarium Scoticum; note: the modern thread count calls for more than one white line.

Malcolm Hamilton Archbishop of Cashel, first son was Hugh Hamilton, 1st Viscount of Glenawly, a soldier in Swedish service, who in Sweden was created baron of Deserf. Captain John Hamilton of Monea was Malcolm's younger son. His sons, Malcolm and Hugo, went to Swedish service in 1655 and were in 1689 created barons of Hagaby. They stayed in Swedish service and Malcolm's son Gustav David Hamilton was named the title of count in 1751, and in 1765 he gained the rank of field marshal.

Last of his descendants was Maximilian von Hamilton, bishop of Olomouc (1714-1776).

The Heraldry of the Hamiltons

The family is so big, we are extremely grateful for this work which is cited in the authors honer

The Heraldry of the Hamiltons

The heraldry of the Hamiltons : with notes on all the males of the family, description of the arms, plates and pedigrees 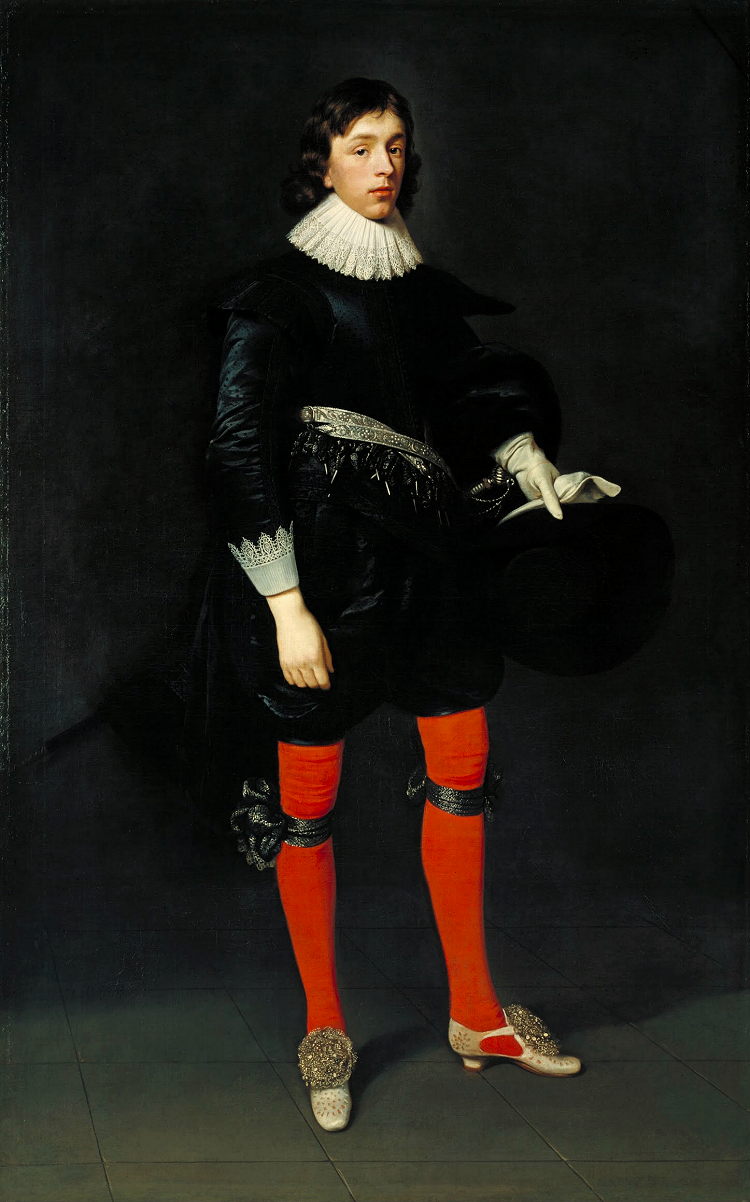 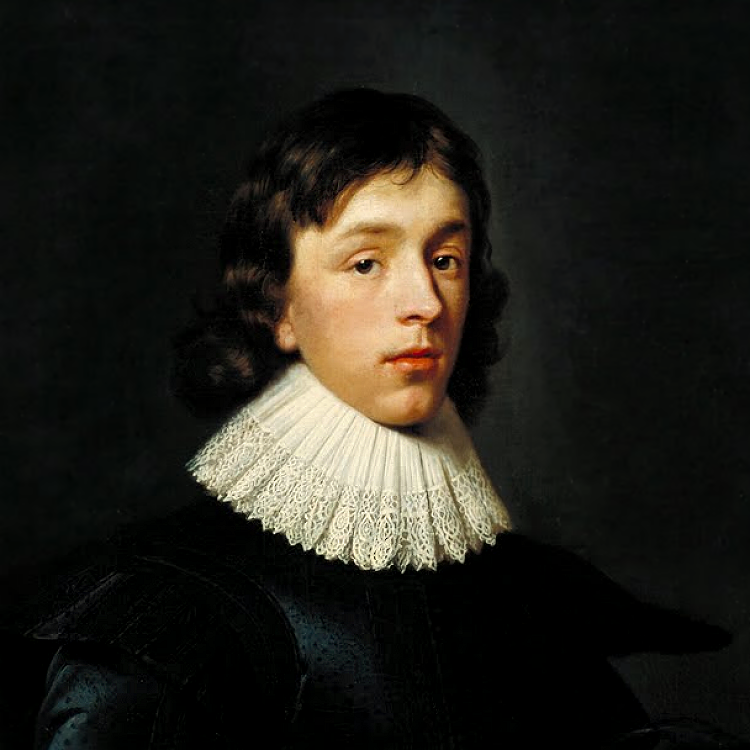 Born the son of James, Marquess of Hamilton and the Lady Ann Cunningham, following the death of his great-uncle James, Earl of Arran in 1609, the three-year-old was henceforth styled Earl of Arran. At the age of eleven he went with his family to live at court in London. At fifteen he was married off to a nine-year-old relative of the King's favourite, the Duke of Buckingham. (The union was only brought about to satisfy Buckingham's political aims, and it appears the young Hamilton was unhappy with the marriage. The couple nevertheless produced six children - of which only two survived childhood, both girls.) 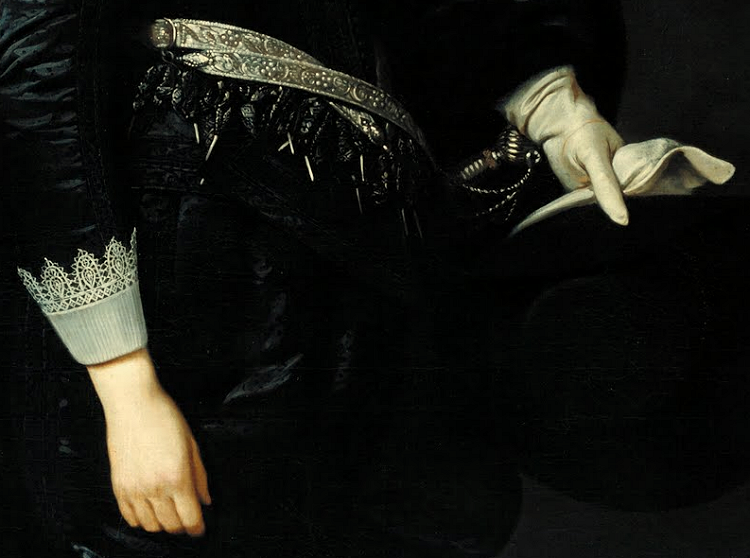 His father died in 1625, and three weeks later so did King James VI. The new marquess was only nineteen, but inherited all his father's titles and privileges; at the coronation of the new king, Charles I, Hamilton bore the Sword of State at Westminster Abbey. He soon was made a Gentleman of the Bedchamber, Knight of the Garter, a Privy Councillor in both England and Scotland, and Master of the Horse, a post he retained until 1644. 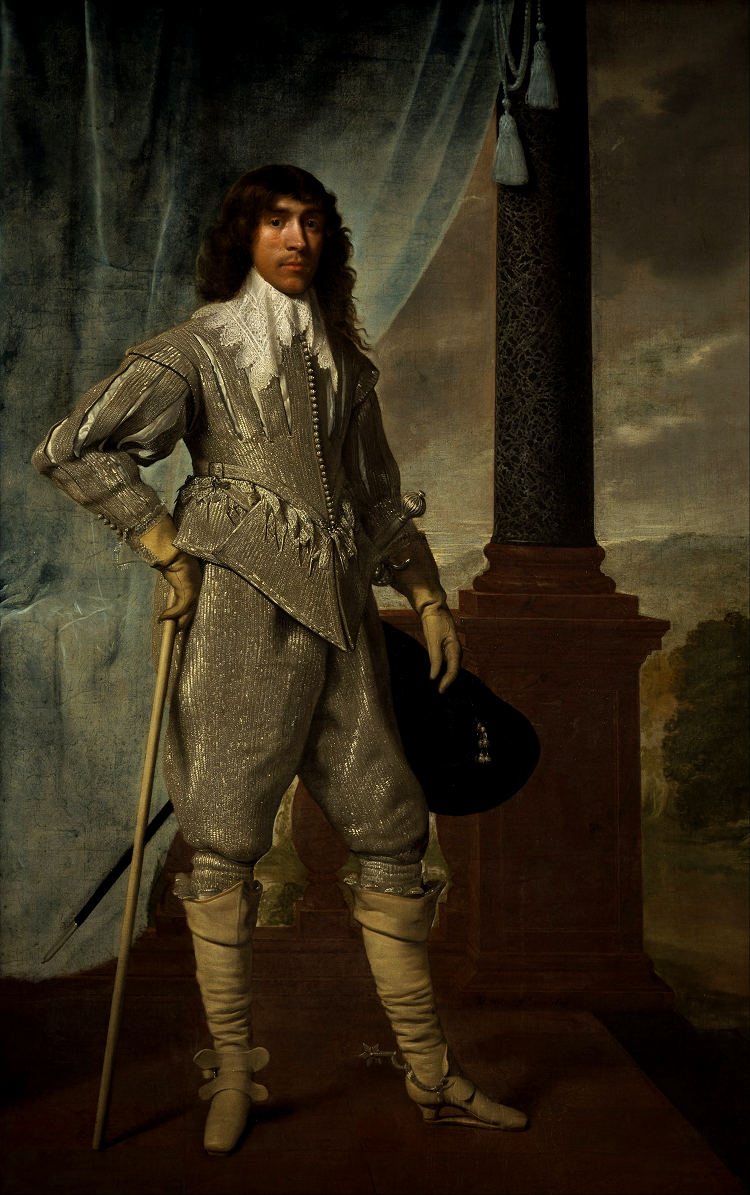 The second portrait by Mijtens, painted in 1629, when the now-Marquess-later-Duke of Hamilton was twenty-three.
In 1631, despite a lack of military training, he led an army of English and Scots to Germany to fight with the Swedish in the Thirty Years' War. Though Hamilton had to be propped up by more experienced officers, it appears he was no coward and was committed to his task. But his troops were never fully organized or well deployed and after disagreements with the Swedish king, he and many of his officers were discharged and returned to England. 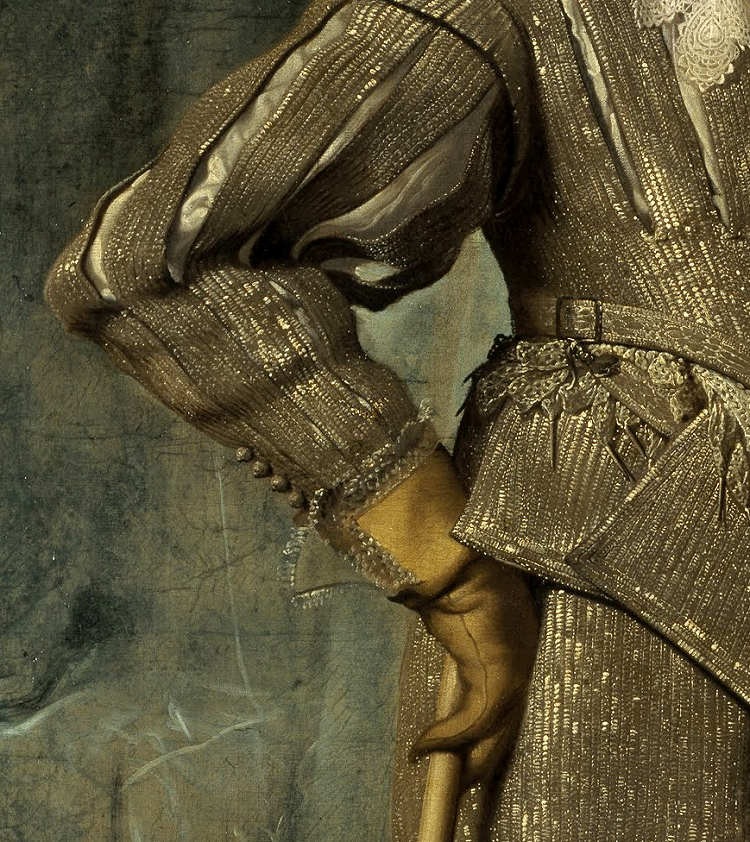 On his return, Charles I appointed Hamilton his chief adviser in Scottish affairs. Six years later, with revolt breaking out in Scotland, Charles made him commissioner in an effort at appeasement, Hamilton being Scottish. There followed several years of political wrangling and intrigue, with Hamilton being attacked from both sides and his own sympathies fluctuating. Egotistical and probably not overly bright, he was also no stranger to intrigue, himself; toward the end of this period he was even accused of treason against the King by another Scottish nobleman. 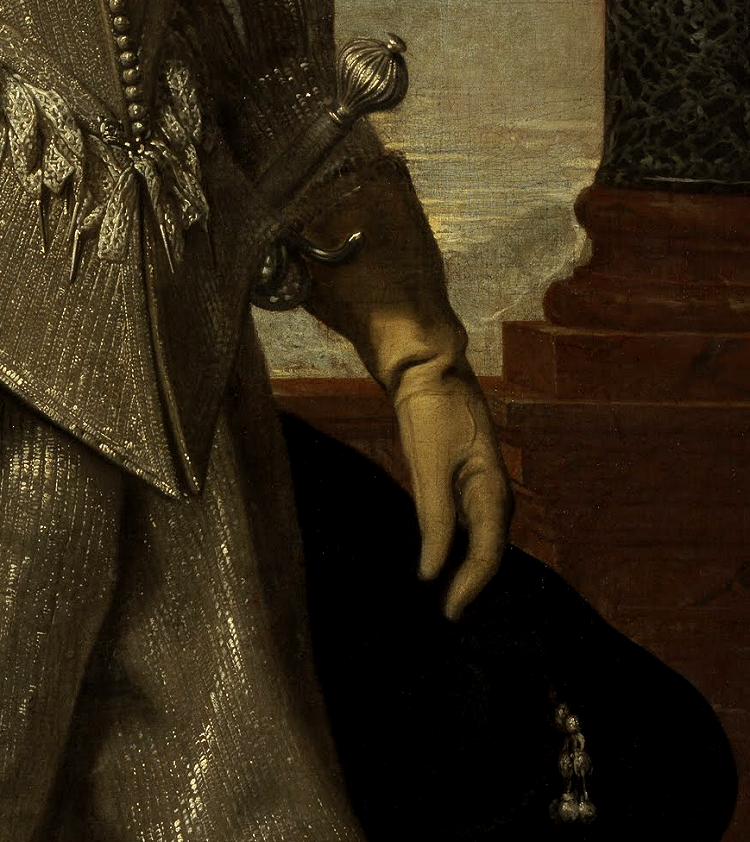 He still held Charles' favor and confidence, though, and was further ennobled in 1643. The Marquessate of Hamilton was raised to that of a dukedom, and he was awarded the Marquessate of Clydesdale, the Earldom of Cambridge, the Baronies of Aven and Innerdale. In addition, he was also re-granted the Earldom of Arran. Though by this time the English Civil War had already broken out, Hamilton was still trying to control the Scottish political situation, foolishly antagonizing other powerful nobleman and even appearing to work against the interests of the king. Charles had finally had enough by the the end of 1643 and Hamilton was arrested. He spent three years in various places of confinement, but was liberated by Parliamentary troops in April of 1646. 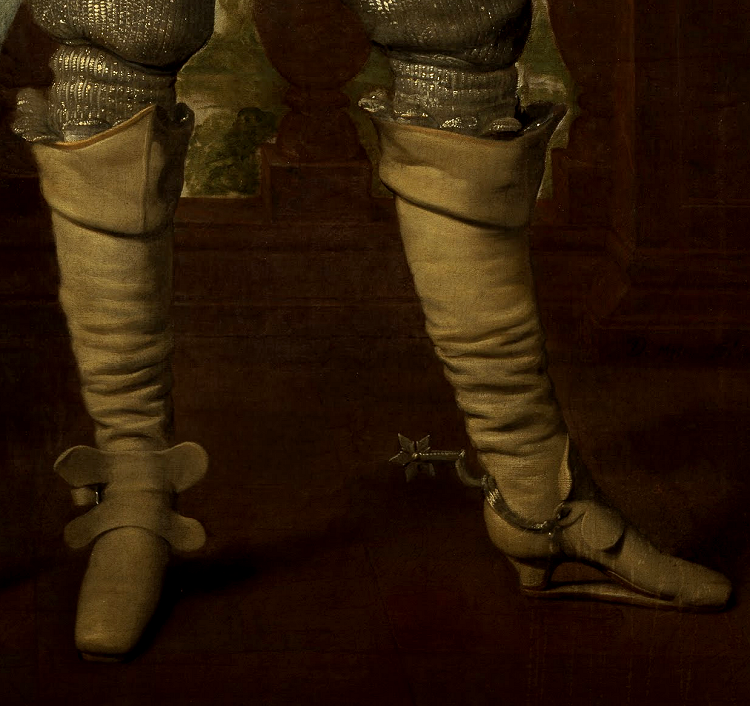 Now returned to Charles' favor, the king conferred on Hamilton the heritable office of Keeper of Holyroodhouse. Then, after the King was delivered up to Parliamentary commissioners, Hamilton was able to temporarily gain authority in Scotland and, in July of 1648, he led a large army into England in defense of the King. He showed a complete inability as a military commander and, even with vastly superior numbers, was quickly defeated by Cromwell and his forces. He, himself, was taken prisoner at the end of August. His trial for treason began in February of the following year - seven days after the execution of the King. He was condemned on March 6 and beheaded three days later at the Old Palace Yard, Westminster. (A setting that had witnessed the executions of Sir Walter Raleigh and Guy Fawkes, among others.) He was forty-two. 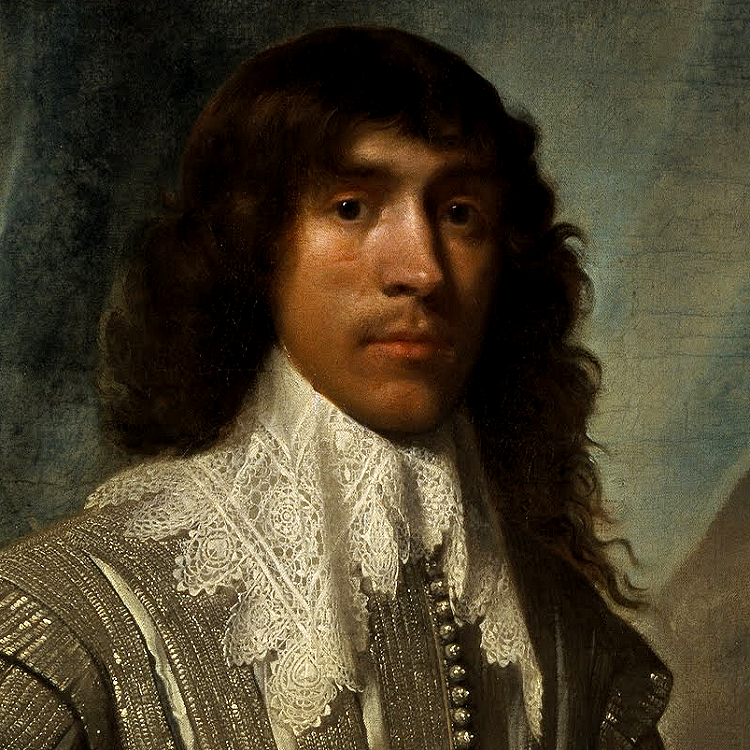