THE GREENS OF BOKTON, DRAYTON

I descend through to the Greens on both my mother and fathers side.

Descent through my grandmother Natalie and father.

THE GREENS OF BOKTON, DRAYTON

The Lords of Greens Norton came from Northamptonshire, England. The heirs to each generation were continually named either Thomas or Henry. One of the earliest ancestors recorded is Thomas de Green (b. 1292), son of Sir Thomas de Green, Lord of Boughton. He married to Lucy le Zouche, daughter of Eudo le Zouche. Thus Lord Green would be the fifth heir to be named Thomas. This branch of Lord Nortons were descendants of the Norwich branch of Greens. Thomas’ ancestor, Sir Henry de Green, Lord of Greens Norton and Lord Chief Justice of England, is credited to have bought the village of Greens Norton, a village in Northamptonshire for a price of 20 shillings. Sir Henry married Katherine Drayton (ancestress to the pioneer settler Anne Hutchinson, born Anne Marbury)[3]

He received Boughton, Greens Norton, and large monetary grants through his inheritance upon the death of his father in 1462.

Sir Thomas’ traits were that of any man of the time. He was conservative in religion, quarrelsome, “conniving”, and was one to take the law into his own hands. Sir Thomas was sent to the Tower of London due to trumped up charges of treason and died there in 1506. The last of his line, Thomas left two fatherless daughters.[3]

On 6 and 17 November 1505, inquisitions post mortem were taken concerning his lands in which the jurors found that he was 43 years of age at that date, and that his father, Sir Thomas Greene the elder, had died 9 September 1462 seised in fee of certain manors, and that his mother, Maud Greene, had ‘entered and intruded into the premises and received all the issues thereof’ from the date of his father’s death until Michaelmas (29 September) 1482, ‘immediately after which feast the said Thomas Grene, the son, entered and intruded without ever suing or obtaining licence from Edward IV or the present king or livery out of the king’s hands, and has received the issues thereof ever since’.[7]

He was sent to the Tower of London about that time on a trumped up charge of treason, and died there on 9 November 1506.[7] The circumstances of the treason charge are set forth in Hardying’s Chronicle:[8]

Also shortly after the departing of [the earl] Philip, George Neville, Lord of Bergavenny, and Sir Thomas Grene, knight, were suspected to be guilty of the treason that Edmund Pole had wrought, and so cast in prison, but shortly after, when they had purged themselves of that suspicion and crime, they were delivered, albeit this knight, Sir Thomas Grene, died in prison. The other lord, for his soberness of living & true heart that he bare to his prince, was had in greater estimation than ever he was before.

In connection with the treason charge, Green was mentioned in a deposition by an unnamed person who had been urged to enter Edmund de la Pole’s service, but who had determined to consult with ‘astronomers’ as to what would be Pole’s ‘likely fortune’ before doing so.[9] 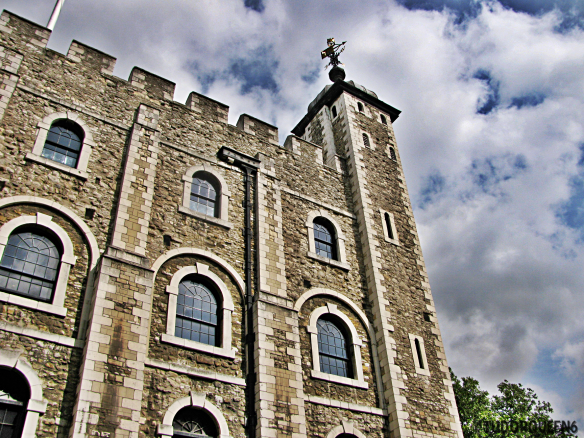 The White Tower, The Tower of London.

The arms of Parr and Green from the Pedigree window of Katherine Parr in the great hall of Hampton Court Palace, London.

This line of Green’s was buried at St. Bartholomew’s Church in Greens Norton, Northamptonshire, England. The family lived at Greens Norton from the fourteenth century up until the death of Sir Thomas in 1506. His estates passed through his daughters marriages in to the Parr and Vaux families. This line of Greens is not for obvious reasons the Greens who immigrated into the United States.

Lord Green descended directly from many noble and royal lines. Interestingly enough, Parr’s maternal line was very involved in the royal courts. Most people, who know nothing of Parr’s ancestry, dismiss Maud [Green] Parr as having no connections and of being of no stature. Her mother’s link the Fogge family no doubt helped her establish herself at court. And of course, Maud would become a lady to Queen Katherine of Aragon; serving her until her own death in 1531.

Too name a few of the ancestors of Lord Green..

The GREENE family was a branch of the de la Zouche* family of whom Gibbon, the historian, said that they had the most royal blood and the most strain of royal blood in all Europe. The Greene's(originally de Grene) at one time were the largest land owners in all England. They were over fifty times descent of Charlemagne (known as 'Charles the Great, King of the Franks and Emperor of the West'), the greatest man of a thousand years.

Through the Royal Welsh line, they claimed a double infusion of Jewish blood -- one line from Aaron, the first High Priest, who was elder brother of Moses; the other from King David himself. Queen Victoria of the same blood firmly believed this. A dozen titular saints, a dozen signers of the Magna Charta, and over thirty crusaders were in this descent.

*John "3rd Baron de Boketon" De Grene De Boketon was Christian and a knight born 1232 Boughton, County Northampton and was married to Alice Notes DeBottisham. When Prince Edward set forth on the last crusade of the Holy War in 1271, Sir John de Grene de Boketon was of the rank, position, and age that entitled him to accompany the prince into battle. During this crusade, the prince and Sir John became close friends until Sir John died in Palestine in 1271, leaving a young son, Thomas, in England. When Prince Edward became King Edward I in 1272, he bestowed the title of Lord on the infant child, Thomas, in honor of the gallant service and friendship of Sir John.

Sir Robert Grene, Knight, Gentleman and Lord of Bowridge Hall, was born around 1442 in Bowridge Hall, Gillingham, County Dorset, England. Ancestry.com claims he died in 1520.Following was Sir Robert "Lord of Bowridge Hill" Grene, gentleman, born in 1499. He married Elizabeth Worgg, born circa 1503. The were married around early 1520. Their 1st child listed as born during their 1st year of marriage. He re-purchased the estate of Bowridge Hall, at Gillingham in Dorsetshire, the family seat of the three preceding generations. He died on October 2, 1563 at the age of 64.Richard "of Stanfford Ryvera" Greene born 1527. He married Joan Converse in 1550 and died May 3, 1608. Joan was born Abt. 1534 in County Essex, England. She died in 1606. Richard and Joan are buried in the family cemetery of Saint Mary the Virgin Parish Church Cemetery. They had at least 8 known children,